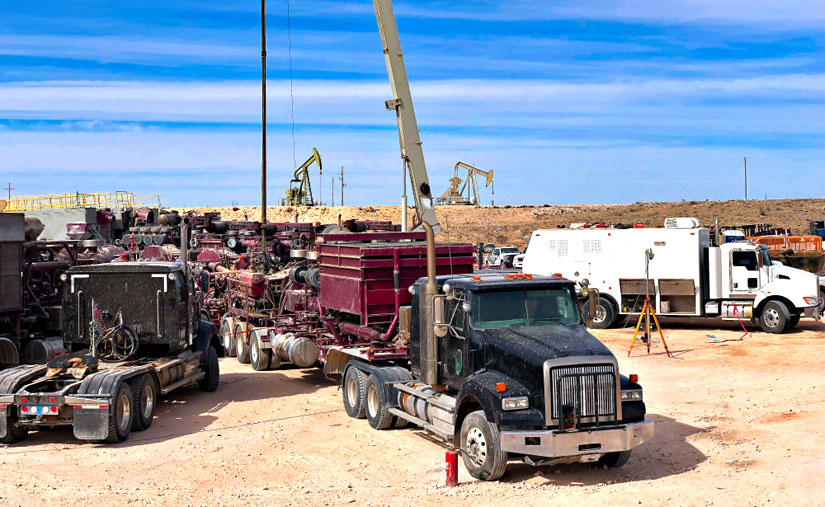 Big rig trucks sit empty as a shortage of thousands of drivers worsens in the booming Texas oil fields, where operators are using 75 percent more fracking sand than last year.

A shortage of tens of thousands of truck drivers is gaining a grip on a hot American economy and throttling the Texas shale fields.

America is short more than 50,000 tractor-trailer drivers, a number expected to swell to more than 174,000 in eight years, according to American Trucking Associations. Expand that to the entire Class 8 truck market, which includes other heavy trucks, and the shortage was more than 270,000 in the second quarter of 2018, according to FTR Transportation Intelligence.

The shortage has been worsening for a lot of reasons: Pay hasn’t kept up with inflation, government regulations have reduced productivity and frustrated some drivers, the workforce is rapidly retiring and younger generations aren’t drawn to a lonely job that can require weeks or months on the road. Self-driving trucks are years away from relieving the crunch.

In South Texas’ Eagle Ford Shale and the West Texas Permian Basin, drillers use thousands of truckloads of sand to prop open rock formations in a single well. They are using more sand per foot of well to increase efficiency, and they are drilling longer wells. In the United States overall, drillers are using 75 percent more sand than a year ago, up to 14 million tons in the fourth quarter of 2017, according to BP Capital Fund Advisors.

It takes hundreds of trucks per well just to get the sand, plus up to 60 per day to dispose of water, and more to deliver oil to Gulf Coast hubs.

The shortage of truck drivers is affecting oil production throughout the whole production process, including moving product from the well site. Amid a pipeline crunch in the Permian Basin, exploration and production companies are holding onto trucks after jobs are done — and therefore paying more for them — because they worry they won’t have enough for the next job.

Drivers have found that new federal safety requirements for reducing operator fatigue with electronic driving logs are eating into their profits. The days of skirting rules or fudging logs are gone; the electronic monitor runs as long as the driver is behind the wheel, even if the truck isn’t moving.

Truckers are 94 percent male and 60 percent white. Private fleet drivers have a median age of 52, American Trucking Associations’ report found. The industry will need to hire 90,000 new drivers per year over the next decade, with half of those needed to replace retiring drivers. And to attract millennials, it will have to show that the trucker lifestyle is changing.