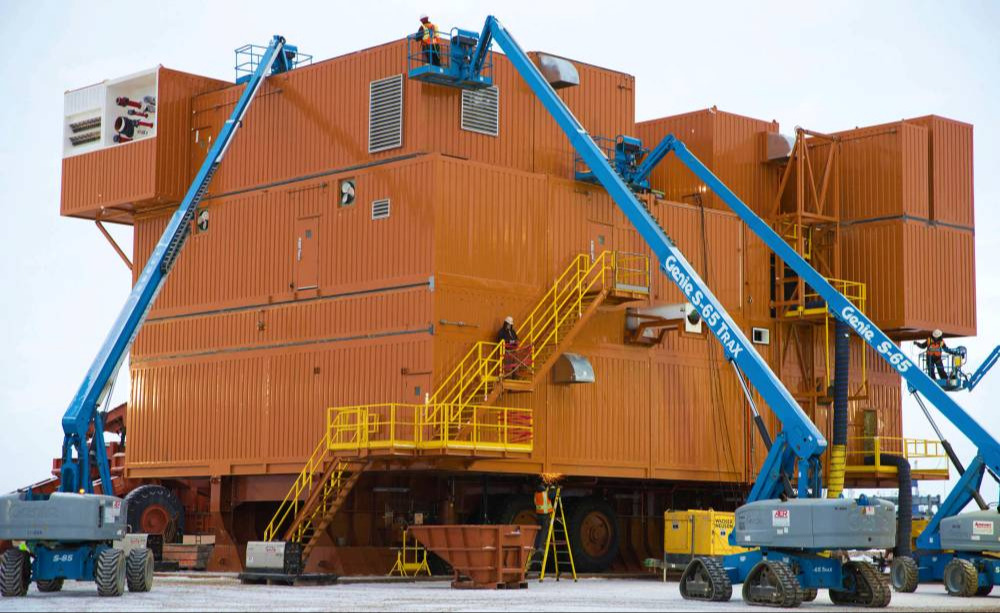 After more than three years of work, ConocoPhillips and Doyon Drilling Inc. are preparing to test Doyon’s massive Rig 26.

Rig 26, internally known as “The Beast”, will be able to drill up to 37,000 feet (7 miles) from the pad it sits on. The typical reach of a North Slope rig maxes out around 22,00 feet, according to ConocoPhillips. To add perspective, Rig 26 will have a reach of 154 square miles compared to the 55 square mile reach of an existing rig. The extended reach will allow drillers to access pockets of oil that would have previously required new infrastructure.

Rig 26 weighs around 9.5 million pounds and has four mud pumps, each rated to 2,200 horsepower. Typically pumps this size are reserved for offshore drilling rigs.

ConocoPhillips Rig 26 Project Director Paul McGrath noted that the company invested in multi-fuel capacity for Rig 26, meaning it can burn a mix of processed field gas and diesel, providing big savings in both cost and emissions.

This, combined with Rig 26’s ability to mitigate surface development footprints comes with a huge environmental benefit, which played a factor in the rig’s commissioning.

In 2015, ConocoPhillips agreed to commission a rig that could pull oil from the Fiord West prospect in the Alpine oil field without the need for additional pads, roads, or pipelines. Committing to such a project gave ConocoPhillips the opportunity to extend their leases in Fiord West.

The oil potential of the Fiord West leases has been known for years, with Atlantic Richfield Co making the discovery in 1996. Unfortunately, their environmentally-sensitive location under the Colville River delta meant that no one was able to reach them in a way that made sense both economically and environmentally-speaking. Rig 26 changes that.

Currently, the rig is 90% assembled at Doyon’s Deadhorse testing facilities. Once commissioned and tested here, the rig will be disassembled and transported 82 miles to the CD2 drilling site, where it will be reassembled and ready to drill in April, according to ConocoPhillips spokesperson Patty Sullivan.

From CD2, the rig will be able to access Fiord West.

According to ConocoPhillips, the company expects to produce up to 20,000 barrels per day from Fiors West’s oil pool. The company says they have at least 10 years of work lined up for Rig 26, including drilling at some of the existing North Slope projects.

Building and transporting the rig was no easy task. The 3.5 year construction period was nearly double that of a traditional-sized North Slope rig. It was built in Nisku, Alberta, an industrial suburb of Edmonton, and transported 2,400 miles north to Alaska in approximately 270 tractor-trailer loads.

Approximately 65 Doyon employees will work on Rig 26 once deployed, and additional help will be needed for support operations such as work camps and truck drivers.