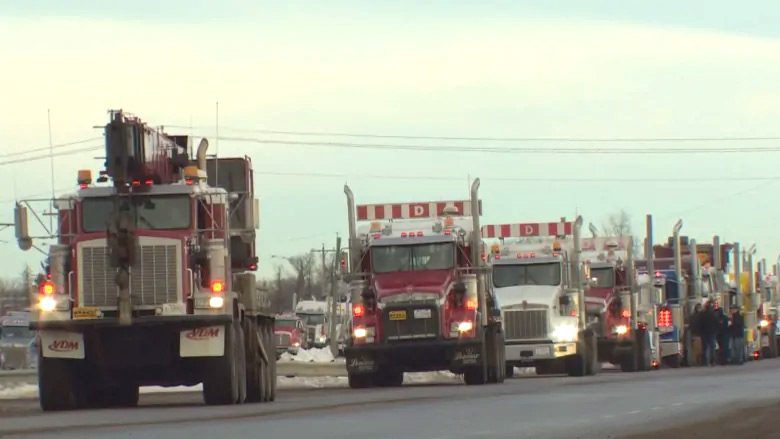 The situation in Alberta is getting serious, and today oil & gas industry supporters came from far and wide to show their support for a struggling energy industry.

Today, a massive crowd converged for a convoy and rally south of Edmonton on the Queen Elizabeth 2 highway.

At around 11AM, The 20+ Kilometer long 'truck convoy' began it's route through the Nisku industrial area - an area where many oil and gas companies have been affected by the low price of Alberta crude.

Just prior to this, local Leduc RCMP sent out an alert letting travelers know that due to said convoy traffic, expect 'extreme traffic delays' on the Highway 19 and Airport Road overpasses.

Truckers for Pipelines, many of whom organized the rally and convoy, pleaded to drivers of trucks of all shapes and sizes “to come out to show support for the Canadian oil and gas industry and Canadian families from coast to coast.”

Rally organizer Laurie Ryan from Laurlee Energy Services said that “We’re just trying to get awareness out to the rest of our province, the rest of our country and recognize that we’re looking to go to work and we want to keep the industry going.”

“We’re concerned about going to work and providing for our families" she went on to say.

Ryan thought as many as a thousand trucks could join the convoy. Ultimately, it was impossible to count the precise number of trucks due. but said the turnout was much bigger than expected.

Leduc County and RCMP worked with organizers to ensure the convoy went smoothly.

Ryan’s company provides transportation and logistics in the oil and gas, mining and construction industry. He said it’s been a tough few years.

The convoy in support of building more pipelines will coincide with the arrival of federal Conservative Party leader Andrew Scheer.

He is attending two events: a mini-town hall and site tour of Ensign Drilling at 12:30 p.m. hosted by Canadian Association of Oilwell Drilling Contractors, and another town hall in the city at the Edmonton Inn (11834 Kingsway Ave.) at 4 p.m.

What's more is that in recent weeks, demonstrations and protests have been popping up around the province, demanding Canada step up to help Alberta’s oil industry given its broader beneficial impact on the national economy.

The convoy comes one day after Premier Rachel Notley said Ottawa’s new $1.5-billion aid package for the oilpatch will help.

The Canadian government is offering C$1.5 billion ($1.1 billion) in loans for the oil and gas sector, as well as some government funding for unspecified projects, after a supply glut sank heavy crude prices to as low as $13.46 a barrel last month.

The country’s energy and trade ministers announced the aid package on Tuesday in Edmonton. The package includes “commercial financial support” loans of C$1 billion from Export Development Canada, and C$500 million in commercial financing from the Business Development Bank of Canada. The funds are available immediately.

The EDC money will be aimed at exporters, including those who have “working capital needs,” while the C$500 million will be for “higher risk but viable oil and gas small business enterprises,” and be spread over three years, according to a government statement.

“All in all, it has to do with liquidity,” Trade Minister Jim Carr said at a press conference. The loan money can augment oil producers’ relationship with commercial banks and “will go a long way in helping them get through this tough spot.”

The liquidity injection is aimed at producers pinched when the price of heavy crude plunged in what Prime Minister Justin Trudeau called a crisis. Since then, the province announced a production cut and heavy crude prices have almost doubled, though global oil prices remain depressed.

However, the announcement doesn’t offer support for the Alberta government’s plan to buy its own rail cars. Another phase of federal measures could also be announced later, one person familiar with the plans told Bloomberg, speaking on condition of anonymity.

Trudeau has been criticized in the oil-producing province for inaction on building new pipelines, a shortage that exacerbated the supply glut. His last visit to the province was met by protests.

“We’re not really seeing anything that’s concrete in the short term,” Bank of Montreal analyst Randy Ollenberger told BNN in an interview, referring to Tuesday’s measures. “While C$1.5 billion sounds like a big number, the industry spends C$50 billion, C$60 billion a year in the good times, and that’s really what creates jobs.”

The government also announced C$100 million in funding for oil and gas projects related to economic diversification, as well as C$50 million in direct funding for “clean growth” oil and gas projects. “We encourage companies to apply for it,” Resources Minister Amarjeet Sohi said at the same press conference. Those projects haven’t yet been publicly identified, though Sohi said the government has already received some proposals. The total announcement is worth C$1.65 billion, mostly in the form of loans.