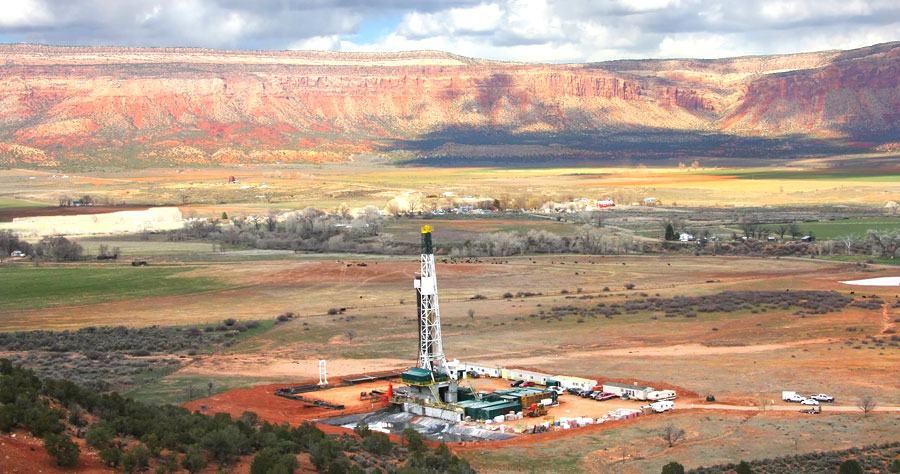 Utah boasts some of the largest oil-sands and oil-shale deposits in the world. The challenge is developing them.

On hot days in Utah’s Uinta basin, rocks weep oil. Rivulets of black tar hint at the untapped riches within and the prospect of unlocking those riches has drawn a motley bunch to this desert outside of Vernal, not far from the Colorado border.

Petroteq Energy hopes to be the first to wring crude from Utah’s so-called oil sands, something tried by few and failed by all. Where others see gnarled sage and dramatic outcroppings, Petrotech envisions a reserve that can produce for decades, putting to shame the rapidly depleting wells of the prolific Permian basin.

“When you look at the resource we have in this area, it is tremendous," Petroteq Chief Executive Officer David Sealock told Bloomberg. “We have enough oil here to produce 10,000 barrels a day for over 25 years." That would be significant for Utah, which last year produced just 91,000 barrels a day, on par with Kansas, but a drop in the ocean for the US, whose output has climbed to 10.9 million barrels a day.

Petroteq is part of a new cohort of wildcatters that have mobilized since US crude prices started climbing last year. They reject the easy money of fracking in favor of the possible gargantuan paydays of speculative ventures with long lead times and high costs. Others flocking to Utah include Enefit, an Estonian company that’s planning to cook the crude out of a dense rock formation 60 miles south of Vernal, and Rose Petroleum, a London-based outfit that wants to take the unusual approach of drilling into a naturally fractured reservoir.

For them, Utah is a paradise of vast, untested resources and permissive regulations. The state offers a 75 percent “alternative energy” tax credit for any company that can produce 1,000 barrels of oil from sand or shale.

But the last company that tried it, US Oil Sands, went bankrupt in 2017 after spending more than $60 million on a plant that didn’t deliver a single barrel. Petroteq’s own facility, a few miles outside Vernal, in country Mormons rejected as being “good for nothing but holding the world together,” was supposed to start producing this summer, but is still working out mechanical and electrical issues.

Unlike Canada’s oil sands, the Utah variety contains very little water, making it harder to shear the oil off the sand. Petrotech claims it’s the first to create a solvent that can do this, claiming its process is less destructive than typical oil-sands operations, which use a lot of water and leave behind large, toxic tailing ponds.

Petroteq says its extraction system uses no water, and recovers and recycles 99 percent of its proprietary solvent. Still, the operation is essentially a strip mine, requiring more than one ton of sand to produce a single barrel of oil. Heavy crude also contains more carbon than lighter grades.

Petroteq said it’s targeting a break-even cost of $30 a barrel, a level that promises some pretty profits as US oil hovers above $70. Petroteq said its oil requires less processing than its Canadian counterparts, bringing costs down.

The company wants to prove that its oil-extraction method works so it can be licensed to other companies or be bought out altogether. It’s a strategy straight out of Alberta.