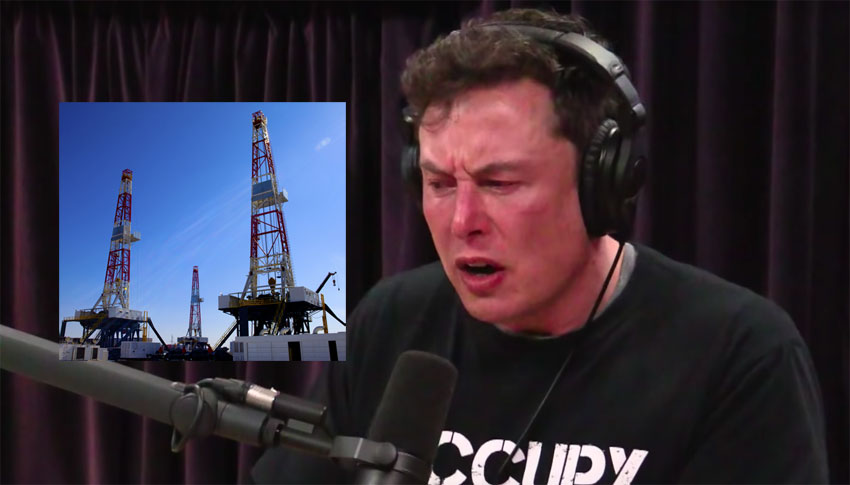 “The Dumbest Experiment in Human History”

Billionaire Elon Musk takes the energy and transport industries to task over their failure to address sustainability and the effects of burning fossil fuels.

Elon Musk, the founder of PayPal, Tesla and SpaceX, has blasted the oil industry, car manufacturers and power companies for failing to curb the use of fossil fuels and accept an inevitable move to a sustainable energy infrastructure.

Speaking last week with comedian and popular podcast host Joe Rogan in a livestream interview before thousands of viewers, the eccentric billionaire talked on a variety of topics, including the effect of carbon in the atmosphere and oceans.

“It's important that we accelerate the transition to sustainable energy,” he told Rogan. “That's why it matters whether it happens sooner or later. We're really playing a crazy game here with the atmosphere and the oceans. We're taking vast amounts of carbon from deep underground and putting this in the atmosphere. It's crazy, very dangerous.”

Musk said the bizarre thing is that it’s obvious we're going to run out of oil in the long term. There's only so much oil we can mine or burn, so we must build a sustainable energy transport and energy infrastructure for the long term.

“Why run this crazy experiment where we take trillions of tons of carbon from underground and put it in the atmosphere and oceans. This is an insane experiment. It's the dumbest experiment in human history. why are we doing this? It's crazy.”

Musk points to a vast transportation system of 2.5 billion cars and trucks in the world, with each vehicle lasting about 20 years. New car and truck production runs at about 100 million units a year, meaning it would still take 25 years to change the transport base to electric, he said.

Is there a way to accelerate that process with subsidies or financial encouragement from the government? “The thing that's going on right now is that there is an inherent subsidy in any oil-burning device. Any power plant or car is fundamentally consuming the carbon capacity of the oceans and the atmosphere.”

Asked about President Trump's ‘Clean Coal’ initiative, intended to rehabilitate the US coal industry and protect mining jobs, Musk was not impressed: “It's very difficult to put that CO2 back in the ground. It doesn't like being in solid form. It takes a lot of energy.”

How about giant building-sized filters that scrub the CO2 from the atmosphere? “Not possible,” is Musk’s blunt response.

“This is quite a complex question. The more carbon we take out of the ground and add to the atmosphere, the more dangerous it is. I think we're okay right now. We can probably even add some more. But the momentum towards sustainable energy is too slow.

“There is a probability of something bad happening beyond a certain carbon concentration in the atmosphere. There's some uncertain number where if we put too much carbon in the atmosphere things overheat, oceans warm up, ice caps melt, ocean real estate becomes a lot less valuable because everything's under water. It's not clear what that number is, but definitely the scientific consensus is overwhelming.

“I don't know any serious scientists, literally zero, who don't think that we have a quite serious climate risk that we're facing.”

Musk admitted his SpaceX project did not help the problem: “Rockets burn [carbon] fuel. Frankly there's no other way to get to orbit, unfortunately. But with cars there's definitely a better way with electric cars and to generate the energy with voltaics. We've got a giant thermonuclear reactor in the sky called the sun. It's great, it shows up every day. Very reliable.

“People ask why should electric vehicles have a subsidy? They're not taking into account that all fossil fuel burning vehicles fundamentally are subsidized by the environmental cost to earth. But nobody's paying for it – yet.”

Is battery capacity the bottleneck when it comes to replacing the internal combustion engine with electric cars and trucks? “You've got to scale up production,” says Musk. “You’ve got to make the car compelling, make it better than gasoline or diesel cars. They have to be able to go far enough, recharge fast, have a 600-mile range. We could totally make one right now that could do 600 miles [on a single charge]. But the thing right now is it's too expensive. You can definitely right now do a comfortable 200-300 miles, which is fine for most people.”