10 Biggest Shale Plays in the US: Here's Where You'll Find Work

A Shale play is, most simply put, where you will find shale gas. These shale plays are shale rock formations where hydrocarbons, upon being heated and pressurized over millions of years, have formed reservoirs of natural gas. Due to the impermeable state of the shale rock, this natural gas is unable to migrate closer to Earth’s surface – hence the need for retraction methods such as horizontal drilling or hydraulic fracturing.

Why Are Shale Plays Important?

To give you an idea of how important these shale plays are, let’s take a look at a few quick statistics:

As you can see, these shale plays are important not only in the lives of Americans, but also for those around the world.

This natural gas benefits the day-to-day lives of many individuals across the globe, the economy of the country, and the oil and gas industry around the world.

Now that you know what a shale play is and why they’re so important, let’s take a look at the top 10 biggest shale plays in the US – chances are pretty high that the natural gas your using to heat your home right now come from one of these 10 spots. 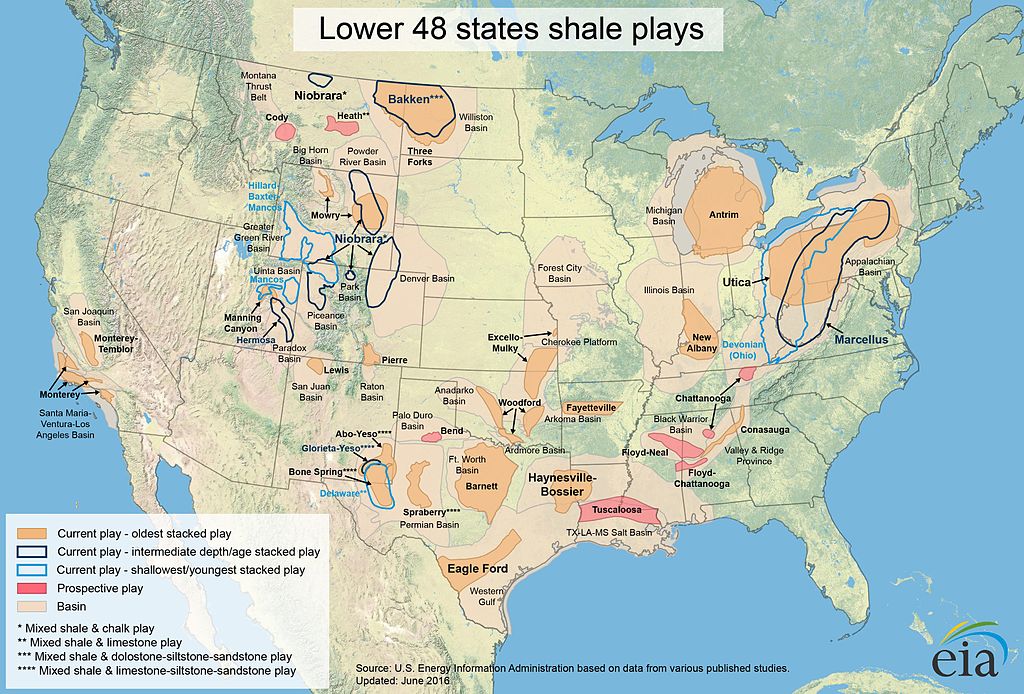 The Permian shale play is located in Western Texas. With plenty of activity in Midland & Odessa, It is one of the largest shale plays in the country, producing, on average, 5 billion cubic feet of natural gas and 1.3 million barrels of oil per day.

Located in the southern part of the state of Texas, the Eagle Ford shale play, like Permian, is one of the largest and highest producing in the country. This area, which spans a land space of over 400 miles long, produces a hefty 6 billion cubic feet of natural gas daily and around 1.2 million barrels of oil daily.

The Marcellus shale play is located in the Appalachian Basin, which spans across the states of New York, Pennsylvania, Ohio, West Virginia, Maryland, Kentucky, Virginia, Tennessee, and Alabama. The Marcellus shale, however, runs only through New York, Pennsylvania, Ohio, Maryland, and West Virginia. Marcellus, unlike the two mentioned above, is one of the smallest producing plays in terms of oil, sitting at 50,000 barrels per day, but is arguably one of the highest natural gas producers, with a whopping 13 billion cubic feet of natural gas each and every day. Wow.

Niobrara shale play is located in and around South Dakota, Colorado, Nebraska, and Wyoming. This play is a bit smaller than those previously mentioned, producing on average around 4.6 billion cubic feet of natural gas and 287,000 barrels of oil on a daily basis.

The Barnett shale play, located in the state of Texas, is, without a doubt, the largest on shore natural gas field in the United States. Barnett shale play alone covers over 5000 square miles. Despite being the largest, physically, by far, Barnett is only a medium ranked producer for the country, sitting at 4.5 billion cubic feet of natural gas each day, and a much smaller 15,000 barrels of oil each day.

Located across the three states of Louisiana, Arkansas, and Kansas, the Haynseville shale play produces 10% of the countries daily supply of natural gas. To give you some numbers, Haynseville produces and impressive 6.7 billion cubic feet of natural gas each day, and a modest 57,000 barrels of oil each day as well.

The Bakken shale play, considered one of the biggest and best oil discoveries in recent history, is located both in Montana and North Dakota, producing a whopping 1 million barrels of oil per day. On the gas side of things, they are substantially smaller, producing only 1 billion cubic feet of gas daily.

The Anadarko-Woodford shale play, located in the west-central part of the state of Oklahoma, is a relatively new site, having first been drilled not even 15 years ago. This play, while still a low producer, sitting at 1,300 barrels of oil and 47,000 cubic feet of natural gas each day, is still both promising and consistent.

Located in Texas and Oklahoma, the Granite Wash shale play is, similar to the Anadarko play, a new and promising site. Currently, they produce 27 million cubic feet of natural gas and 3,200 barrels of oil each day. Production, however, is expected to increase over time.

The Utica shale play, spanning across the states of New York, Pennsylvania, Ohio, and West Virginia, is not only one of the newest shale discoveries in the US, but in North America all together. This play has only been producing since 2011, and is already 9.5 million cubic feet of natural gas and 1,400 barrels of oil each and every day.

As you can see, the US is home to a number of both physically large and high producing shale plays that benefit not only the country, but the world, with new discoveries and possibilities occurring regularly.

Is Energy a Good Career Path?

Energy is one of the most important sectors in the world, with multi-national co...

If you’re interested in starting a career in the energy industry, you’re probabl...

It's no secret that the oil and gas industries around the world provide some top...

There are many jobs in the oil and gas industry that do not require special educ...